Eva is the moderator of our panel at “The Impact of Slavery on American Jurisprudence and Activism” on Thursday, February 21, 2019, in San Francisco. 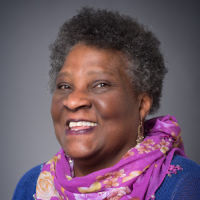 Civil rights attorney Eva Paterson is co-founder and President of the Equal Justice Society, a nonprofit organization transforming the nation’s consciousness on race through law, social science, and the arts.

She previously served 13 years as Executive Director of the Lawyers’ Committee for Civil Rights. At the Lawyers’ Committee, she was part of a broad coalition that filed the groundbreaking anti-discrimination suit against race and gender discrimination by the San Francisco Fire Department. That lawsuit successfully desegregated the department, winning new opportunities for women and firefighters of color.

Paterson is co-chair of the California Civil Rights Coalition (CCRC), which she co-founded and previously chaired for 18 years. As co-chair of CCRC she was a leading spokesperson in the campaigns against Proposition 187 (anti-immigrant) and Proposition 209 (anti-affirmative action) and numerous other statewide campaigns against the death penalty, juvenile incarceration and discrimination against lesbians and gay men. She also served as Vice President of the ACLU National Board for eight years, and chaired the boards of Equal Rights Advocates and the San Francisco Bar Association Foundation.

Paterson has received numerous awards, including the Fay Stender Award from the California Women Lawyers, Woman of the Year from the Black Leadership Forum, the Earl Warren Civil Liberties Award from the ACLU of Northern California, and the Alumni Award of Merit from Northwestern University.

As a 20-year-old student leader at a time of turmoil, Eva Jefferson Paterson was catapulted into the national spotlight when she debated then-Vice President Spiro Agnew on live television. Dubbed the “peaceful warrior” for fostering non-violent protest in the aftermath of the 1970 shooting of student demonstrators at Kent State University, she was named one of Mademoiselle‘s “Ten Young Women of the Year,” featured on the covers of Ebony and Jet, and called to testify before Congress.

She is a graduate of Northwestern University, where she received her B.A. in political science and was elected the first African American student body president. She received her law degree from U.C. Berkeley School of Law.